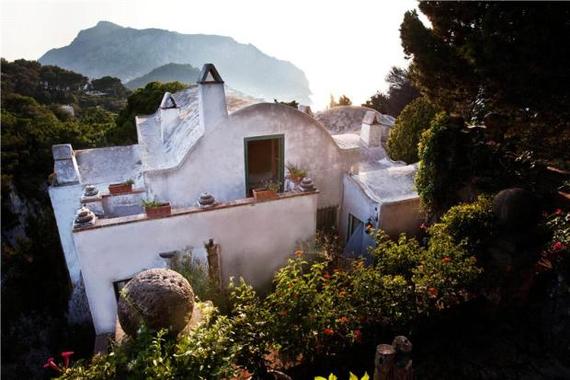 Edwin Cerio is one of the most prominent personalities who spent and devoted all his life to Capri, who inspired the design of one of Villa Marina’s most beautiful Pool Suites: the Cerio Pool Suite.

An eclectic scholar who was deeply involved in the island’s political, social and cultural milieu. He was Mayor, botanist, writer and designer. Here is his story.

Cerio was the son of Ignazio, a well known doctor who was born Abruzzo. He graduated in naval engineering in 1898 and soon began working at the Krupp Foundries in Germany and South America.

He loved Capri so deeply that he quit the foundries in March 1913 and, soon after the divorce from his wife Elena, at 45, moved to the island.

Edwin Cerio is still today the best known author abroad who extensively wrote about Capri . Covering an array of many different subjects, his work is often ironic or sarcastic. This is all the more true for his ‘Guida inutile di Capri’ (A Useless Guide to Capri). Other books like ‘That Capri Air’, written in 1927, and ‘Capri nel Seicento’ (Seventeenth-century Capri), published in 1934, provide information that is difficult to find anywhere else.

Some islanders still remember Cerio as a tenacious, intelligent, yet extremely unpredictable person: gracious one day, arrogant the other.

Other than being an excellent botanist, a smart businessman and antiquities collector, Cerio designed some of the most architecturally interesting Capri houses between the two world wars. The most outstanding examples are il Rosaio, la Casa del Solitario  and la Falconetta. His ability to interpret the tradition of Mediterranean architecture in a modern guise made him one of the island’s most interesting designers.

In 1920 Cerio was convinced by many locals to run for mayor. Once elected, he put all his efforts in saving the island from the so-called ‘Milanese sharks’ real estate speculation.

Thus, he issued a urban planning regulation, which is still effective, and organized the ‘Conference for the defence of the landscape’  (1922). At the end of the conference, Cerio created a commission to oversee the construction activities on the island, fight speculation and enforce building regulations.

After only two years, profoundly dissatisfied with the results he had obtained and disillusioned by the lack of interest showed by the people of Capri, Cerio resigned. He nonetheless remained a sort of  ‘head of the household’ as he would receive and welcome all the most prominent personalities who arrived on the island, such as Neruda and Ada Negri.

During his last years, Cerio implemented the Palazzo Cerio collection, which he founded together with his brother, in memory of their father Ignazio.